Posted by: Kevin Baumann December 16, 2013 in Blog Leave a comment

On visiting this long rectangular garden which the owner had already transformed into a fine space, the client explained the improvements he would like us to undertake. This is the list we drew up:

Going on the information above the client and I drew up a sketch within an hour of the first visit and the job was signed off that day, I wish winning all contracts went this smoothly.

The divide between the vegetable area and the garden was achieved by dropping 3M high 4×4 pressure treated posts every 2.3M apart into good sized holes filled with concrete . Our landscapers then placed 2.3Mx1.4 trellis panels beteen each post. Above the panels  there was a 0.8M gap to a simple pergola style effect 2.2 M high along the length of the divide. This looked well as it didn’t break the garden up as you could see beyond the divide but not the planted vegetable beds below. 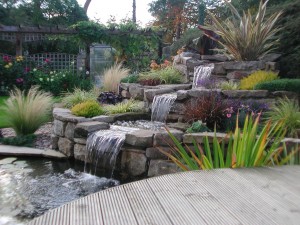 The path was then constructed using 14mm Ballylusk gravel laid on a 75mm compacted layer of Ballylusk dust and bordered by red brick which led down to the glasshouse through an entrance in the pergola/trellis divide. 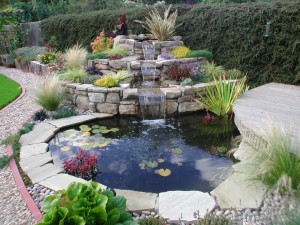 The raised sleeper bed was then constructed by cutting Polish railway sleepers into 60cm sections, laying them vertically side by side using 80mm screws to connect. Concrete was then dropped around the sleepers to strengthen. The backs of the sleepers were covered with visquine heavy duty plastic to protect  and the beds were then filled with topsoil.

The mowing edged to the lawn was then installed using the same red brick as with the path. The red brick gave a strong edge between bed and lawn insuring no more broken edges in the future. It also provided  great definition to the space and low maintenance when cutting.

The pond and waterfall were next to be constructed. To reduce the rectangular effect of the garden we positioned the water feature one third the way down the garden and outside the kitchen window where it could be admired at all times of the day.The retainer for the waterfall was built using RSJs and railway sleepers to a height of 2M. The pond and waterfall were then both built simultaneously. Different levels were allowed in the pond for aquatic plants which require different depths to thrive,  down to a final depth of 1.3M. The liner used was EPDM rubber which is the strongest and best. The waterfall was built in 3 stages 1 tier after another using individual pieces of liner for each tier. The header stones were created by cutting and smoothing out 25cm wide rectangular channels to give a lovely rill effect.

Our landscapers then installed the Oase Aquqmax pump connected to the Bitron UV light and Oase filtroclear. This system will insure clear water and a clean environment for the fish to thrive. Oase underwater lighting was also installed in each pool of the waterfall and the pond

The meandering deck was next to be installed. The deck was designed to overhang the pond to allow for sitting, feeding and viewing the fish, this relaxing and the fish eventually become very tame. The deck was constructed to be the same height as the internal floor of the kitchen which gave a seamless transition between house and garden. 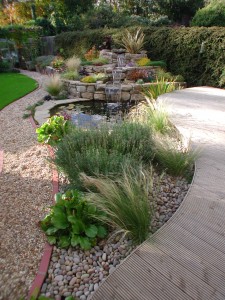 The overall effect achieved was extremly satisfactory and the client was very happy with the results.

If you are impressed by what you see and would like a professionally constructed Koi pond, waterfall, lake or stream contact Kevin Baumann on 086-8198444.

Dream Home in Wicklow: My Own Landscaping Contract