Posted by: Kevin Baumann February 19, 2022 in Blog Leave a comment

We won this contract through the clients wifes mother, which we had previously done work for.

On sitting down with the client and his wife we came up with the following wishlist.

After the meeting I surveyed front and back areas, taking photos as I went.

In 2 weeks I emailed scaled Garden Design front & back, complete with estimate for works. Thankfully both were accepted and an approx. date was scheduled for completion of works.

We first broke out the existing concrete to a depth of 100mm and carted to dump. For the bed areas we went to a depth of 400mm and filled with topsoil. For the driveway and path we spread and compacted 40mm layer of quarry screenings. Starting on the right boundary we laid apron of 100x100x50mm split brown cobbles, 4 cobbles wide. Then we laid 900x600x30mm brush hammered brown granite slabs, 6.5 slabs wide. We then mirrored the cobble apron which continued around bed. This gave a driveway a width of 6.6M , plenty of room for parking and pedestrian access. We then finished with paving up to side of house and around to wheelie bin area. All the cobbles and paving were then grouted with strong cement mix.

All that remained now was the planting. For the wheelie bin area we used mature Portugeuse Laurels planted tightly to give instant screen. For the rectangular bed we first laid geo-textile. Cutting holes in the geo-textile we planted central standard Bay Laurel, 4 Buxus balls and finally Buxus hedge. The geo-textile was then disguised with 50mm of 14mm Ballylusk gravel. Geo-textile is a great weed suppressant, reducing future weed maintenance, working to our brief. 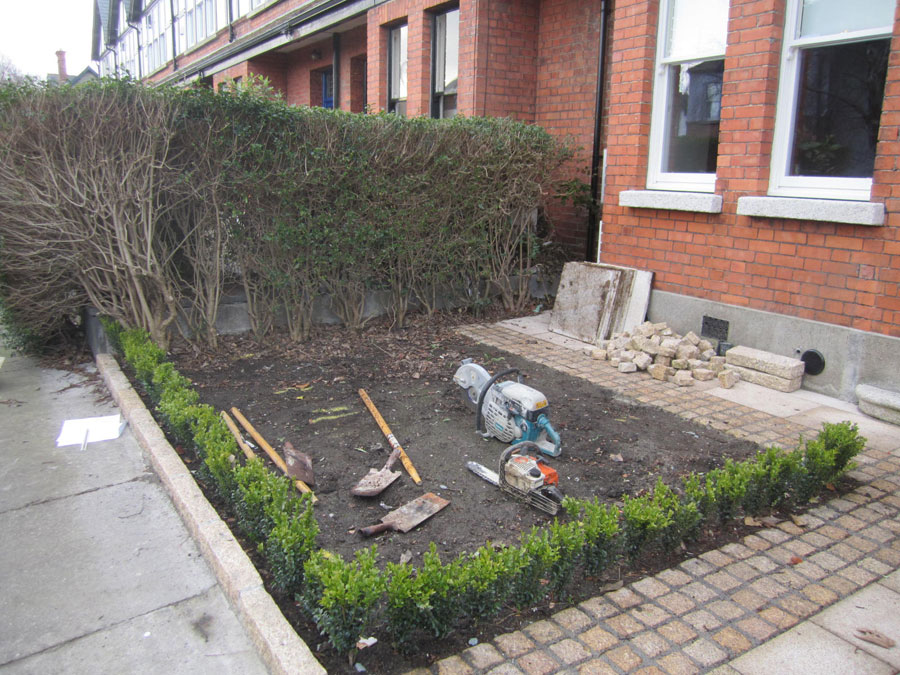 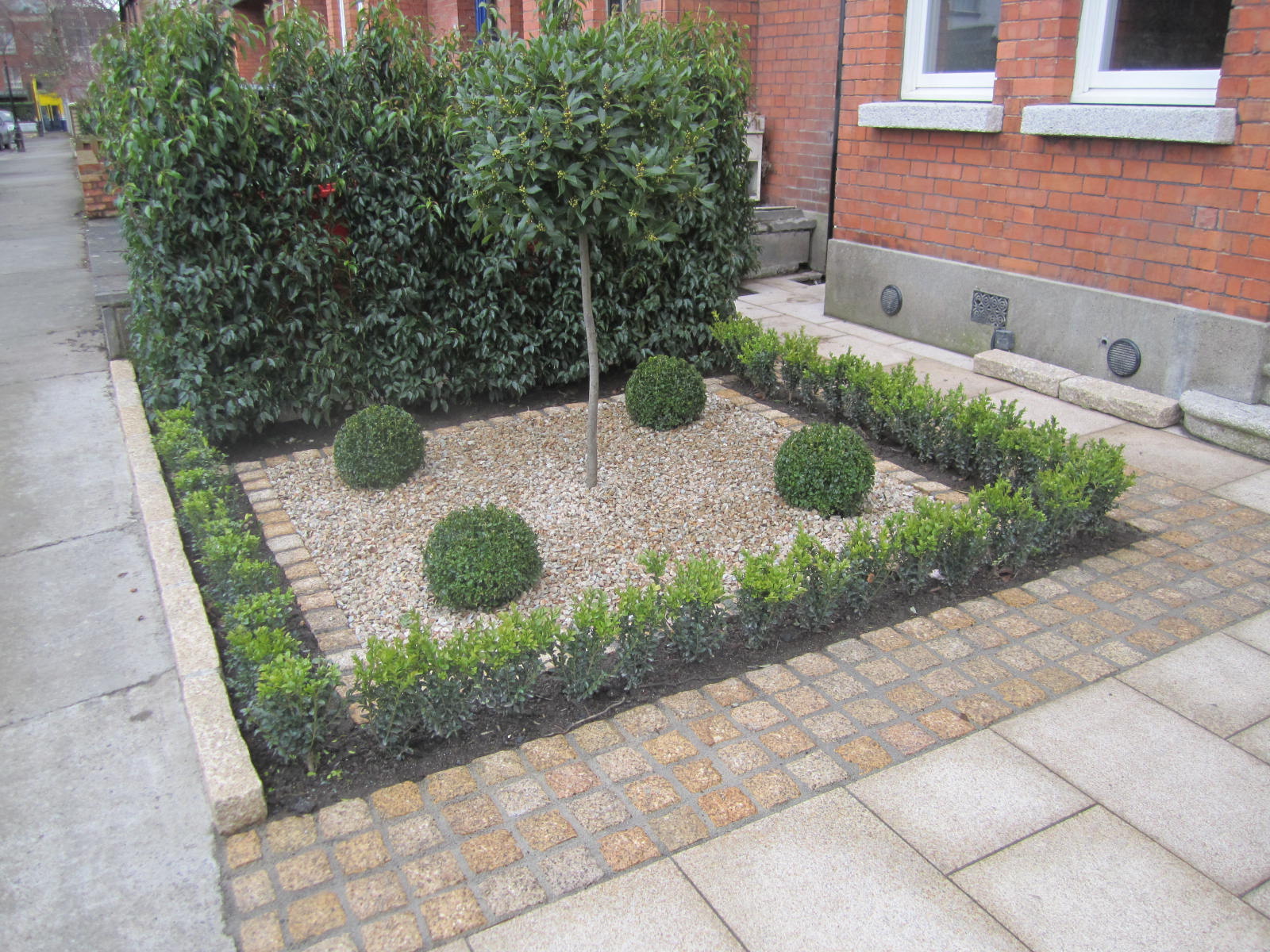 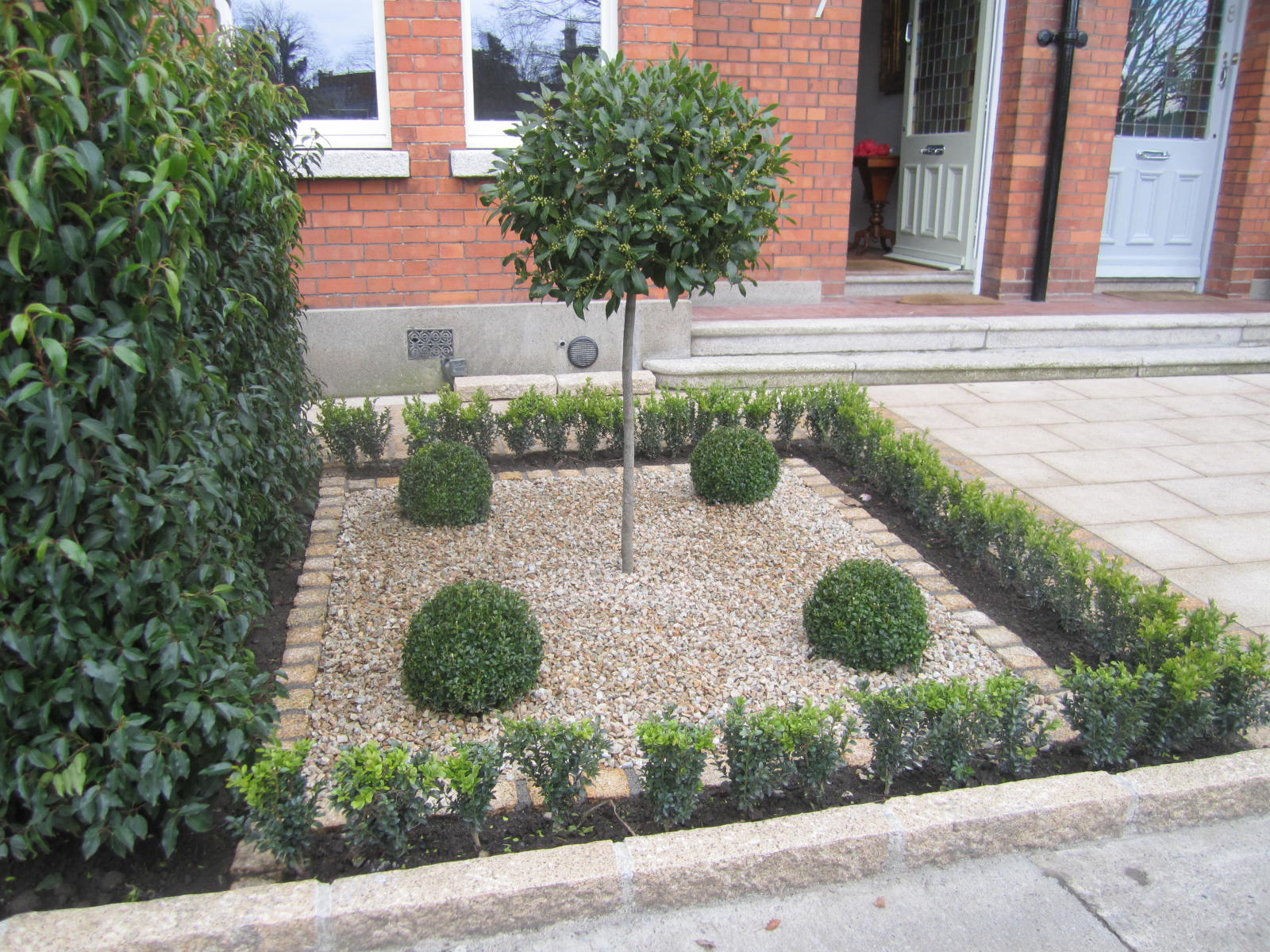 Thankfully there was a laneway running behind the existing concrete shed. This allowed for access of our .8 tonne mini digger. We began by continuing excavations left by builder 4m back from new extension. Installed ACO drain around the extension to existing outlet to remove water. Then 50mm of quarry screenings were spread and compacted creating our sub-base. We then laid our patio using 600x600mm black limestone slabs. A gap was left for 100x100x50mm split silver cobble. The sliver cobble was then laid and gave great contrast. 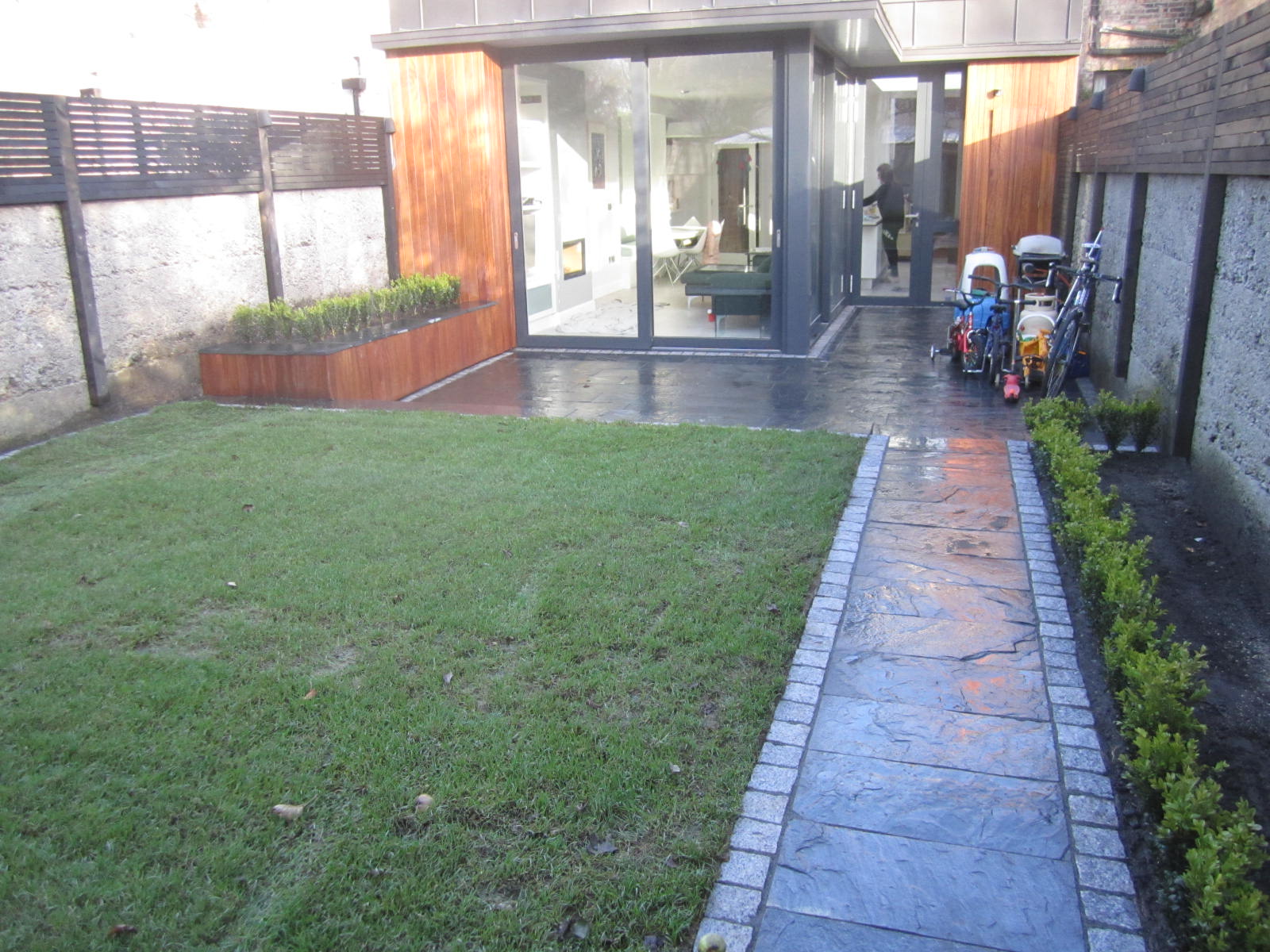 4” solids were used for step, small wall and raised bed. The step and small wall were clad in black limestone. The raised bed was clad in cedar and capped with 600x300mm slabs which doubled up as a seat. The bed was lined with Visquine and filled with topsoil.

We laid 4 core SWA armoured cable from one side of the garden to the other to allow for future garden lighting. A path was then laid the length of the garden, ending at shed door. A 500mm wide bed was allowed for along the base of the wall. The path was created using 600x300mm with 100x100x50 split cobble each side.

A mowing edge was then installed around the entire circumference of proposed lawn area using 100x100x50mm split silver cobble. This would provide definition and reduce maintenance when cutting grass. A circle of cobbles were also installed around existing apple tree. 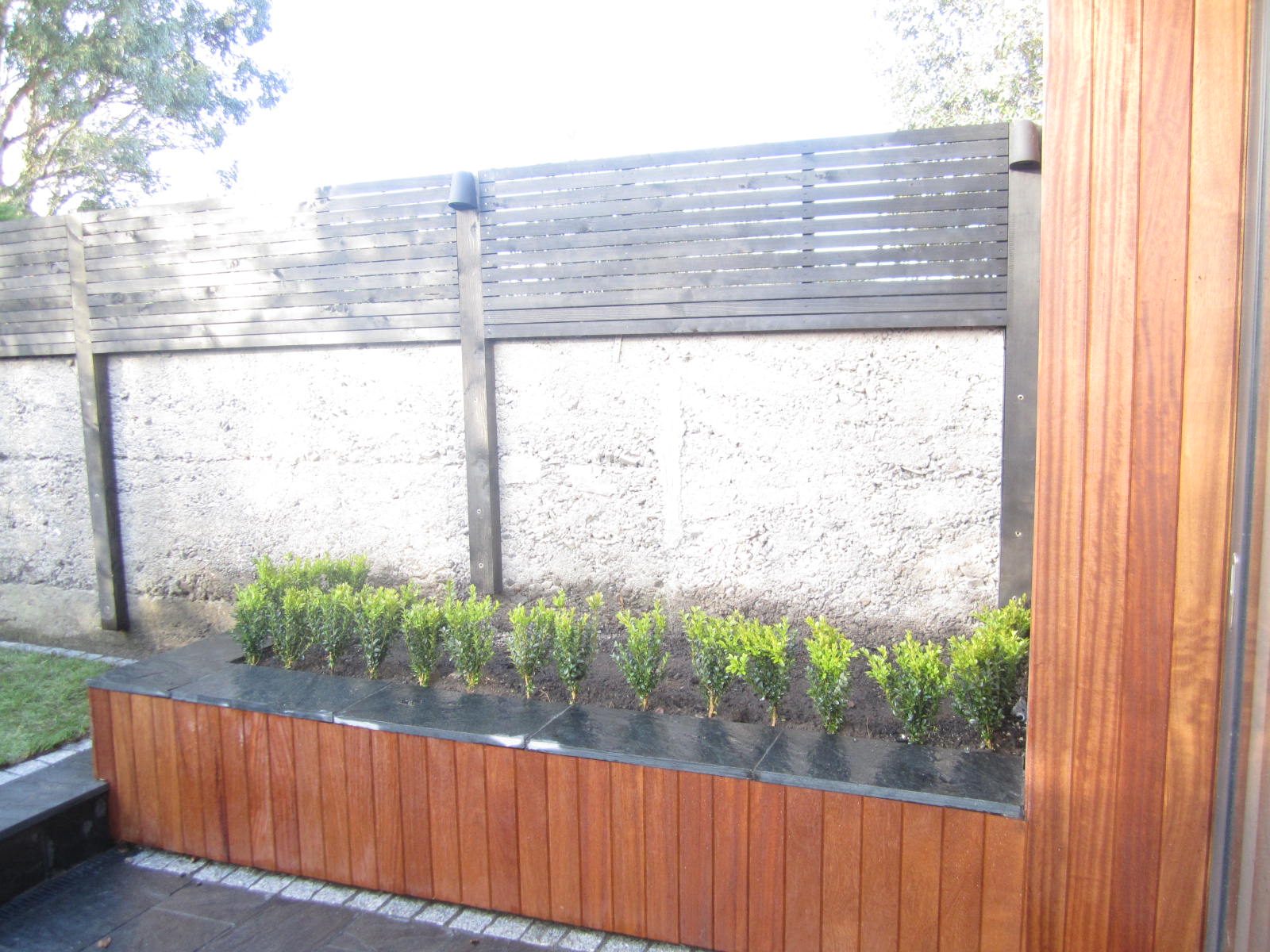 We then installed the wall extension. The existing wall was strong, allowing us to connect 4×3” posts directly to the wall every 1.8M, using express nails. The posts finished 100mm above ground level, had a chamfered finish and looked really well, softening the wall up and adding definition/interest. In the centre points between the posts uplighters would eventually be installed to glaze the walls. The walls had a lovely texture. The client originally wanted to plaster, but I talked him out. Between the posts we added our fencing sections. The sections were made up of 50x25mm latts with 5mm gaps.The wall extensions were then painted in black in keeping with the whole colour theme. 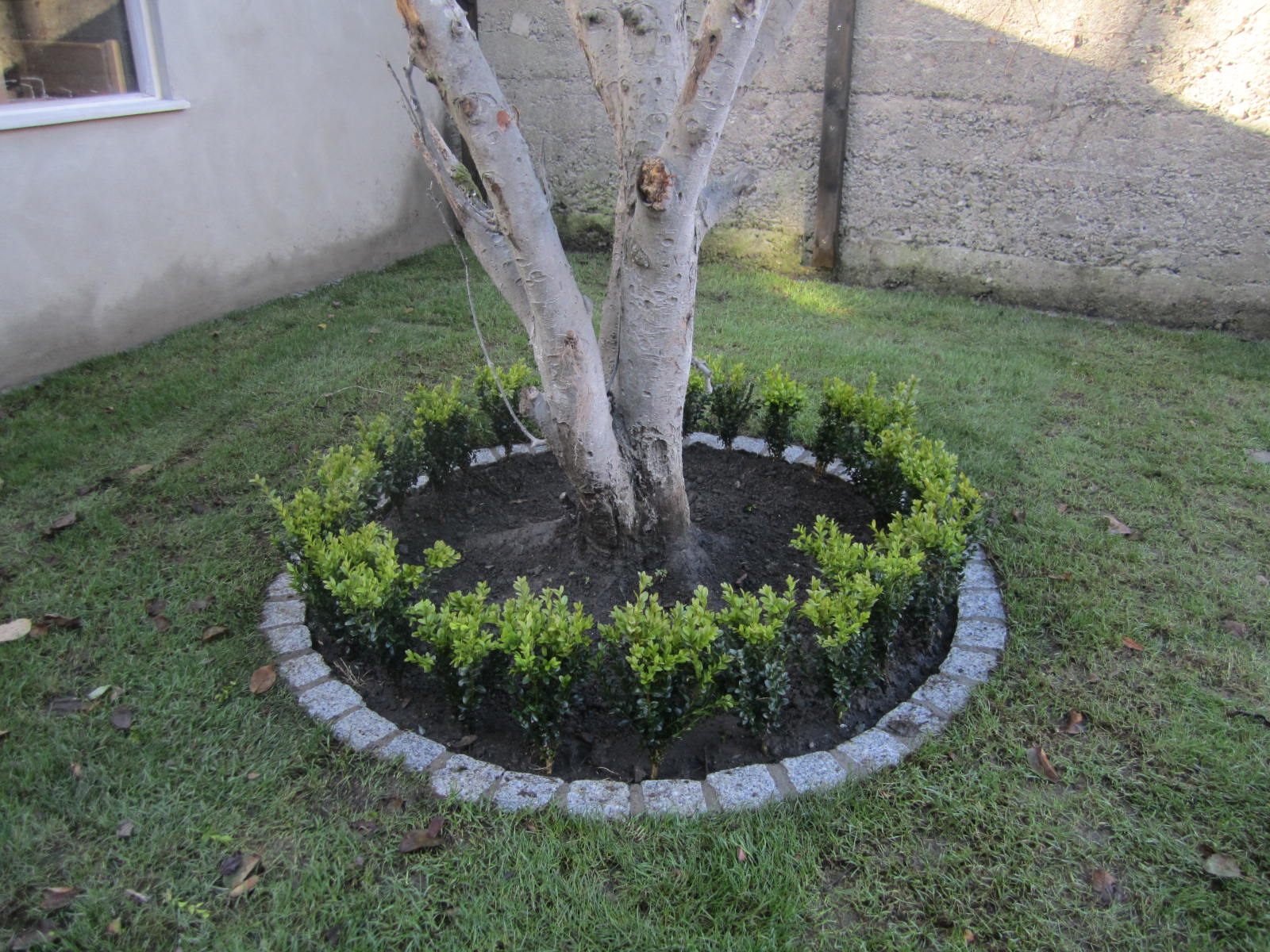 Next we levelled out and prepared soil for the lawn area. Preparation here is key. The prepared soil should be free of stones and have a fine tilth. The whole area needs to be heeled in, meaning slightly compacted. We completed the lawn using instant roll out turf. 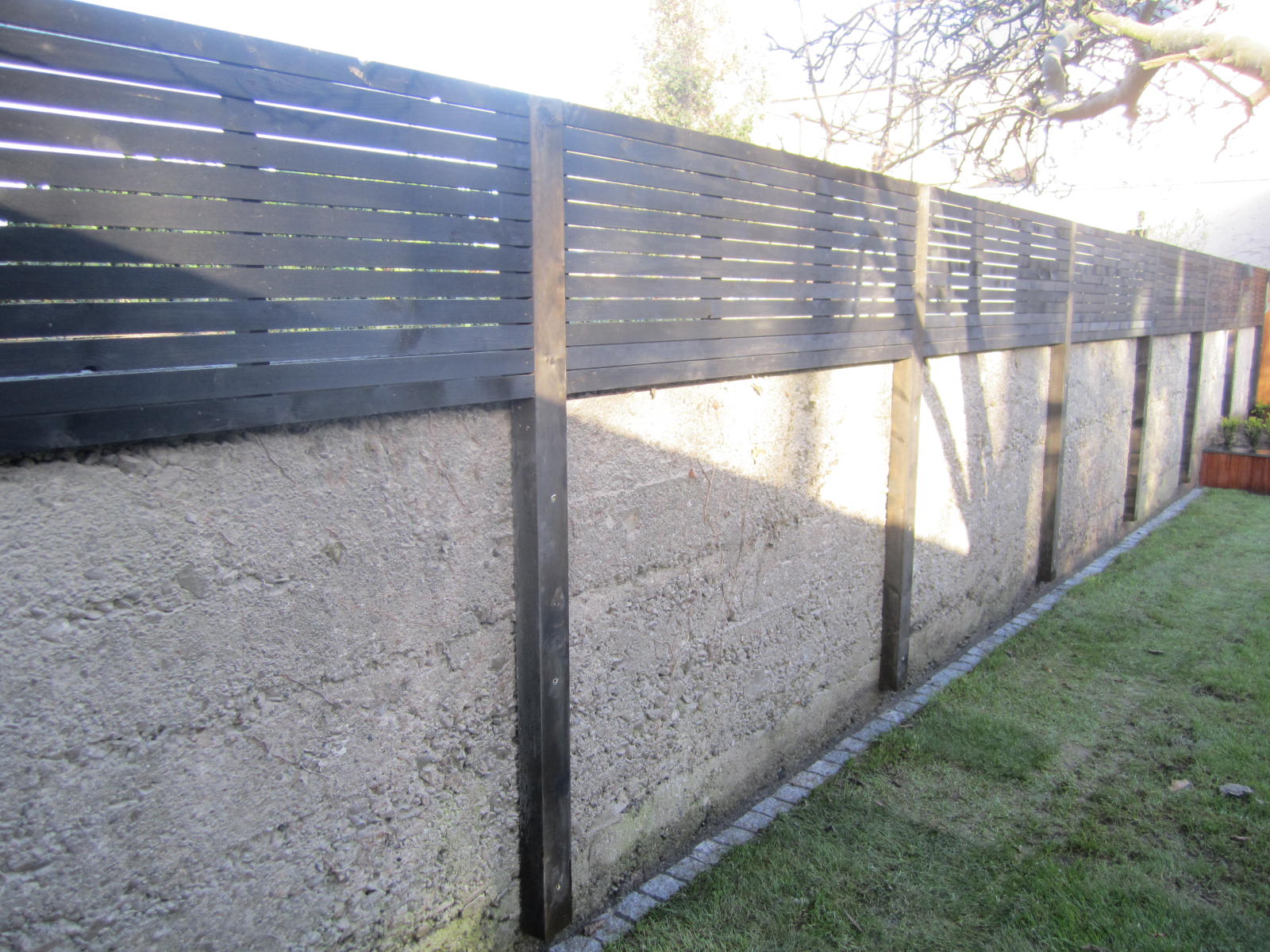 The planting was kept minimal with the use of only Buxus hedging.

5 Down lighters were then installed around the seating area.

It would be the future uplighters between the posts that would make this garden at night. 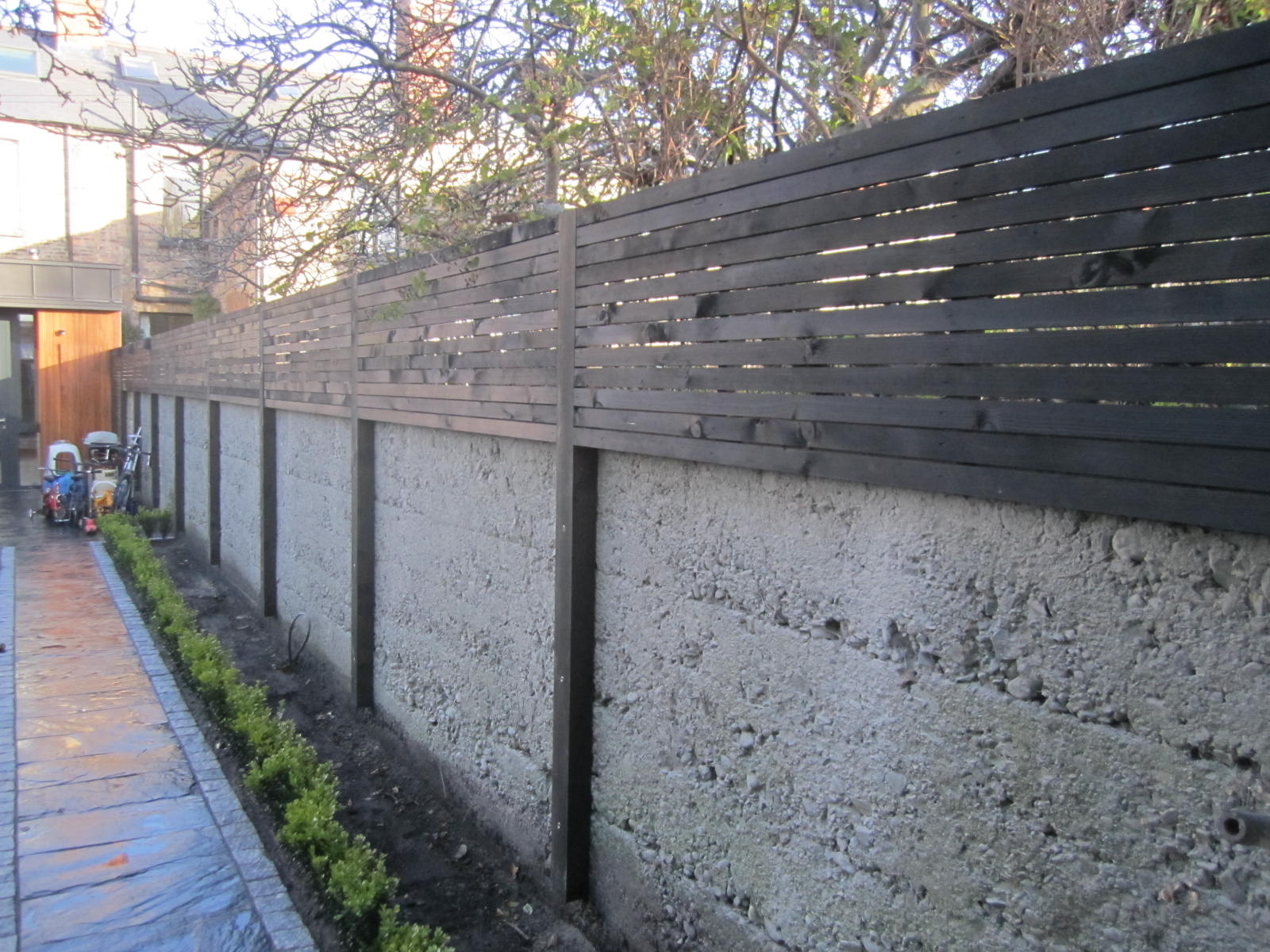 The client was delighted with the results, and the fact we came in, within budget.