Posted by: Kevin Baumann December 5, 2022 in Blog Comments Off on Back Garden Landscaping Design & Construction in Mount Merrion, Co Dublin

We won this contract having completed the front driveway of this property the year previous. Refer to the blog on Dublin driveways, Merrion Court Complex, Mount Merrion, Co Dublin, to view. The clients were so happy with that job they wanted the return of our expertise for the back garden.

On first site visit the back garden was of a medium to large size. The house faced South. It was so well surrounded by mature trees/shrubs it had an almost Country feel, even though it was situated in the centre of Mount Merrion. The only exposed area was along the back railing of the garden where there were few shrubs under the existing mature Prunus ‘Pissardii’s, there were also some gaps here and there along the West side. Two doors led out from the house to the East side. They led directly onto a concrete patio. The patio was in bad condition, with many cracks and trip hazards. The concrete patio extended parallel from the house 2.5M. At the fat edge of the patio was a low old style column wall, which had a lot of character, but needed re-painting. The height of the wall was 500mm making the top perfect for sitting on. This wall led the entire run, with 2M openings each end. There were 3 large 600×600 square rusted man-holes. 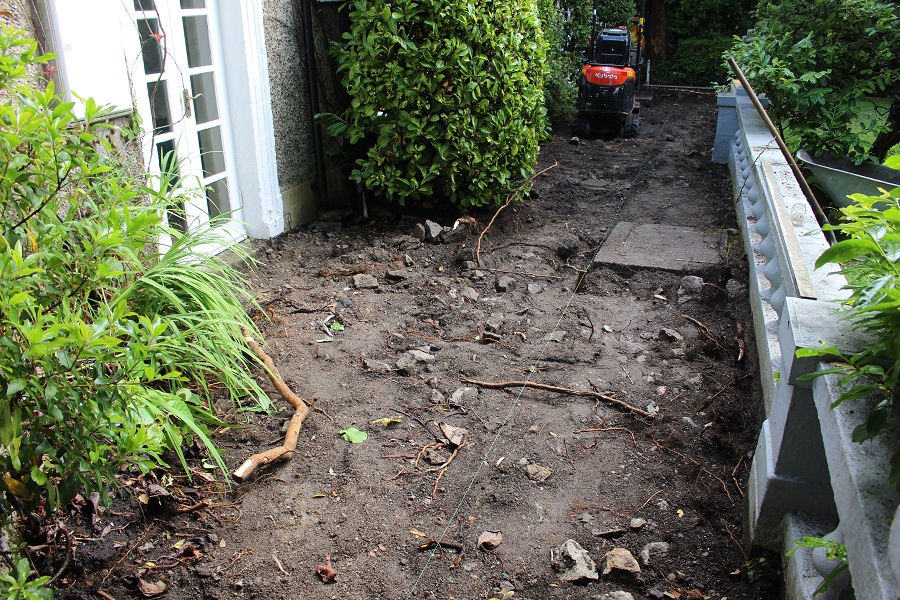 The man-holes were very unsightly and would need to be disguised. There was a 1.2M wide bed running in front of the house. Going West the concrete patio led down to a fenced area with steel shed. There was a gap between the steel shed and the house which led to the front garden. All the falls were leading in a Westerly direction. The shed was tucked in nicely at the boundary. The whole facade of the house was covered with Boston Ivy. This looked fantastic but was a real worry as all the roots would be under the concrete we were about to excavate. From the Westerly corner of the concrete patio in front of the shed, a small path extended down the entire length of the boundary. The path had been there for years and was providing no service other than leading to a compost heap at the far West corner. The compost heap had grown high over the years and would need to be removed/dumped. The path was lower than the surrounding lawn, it didn’t look well and there was no reason to keep it. 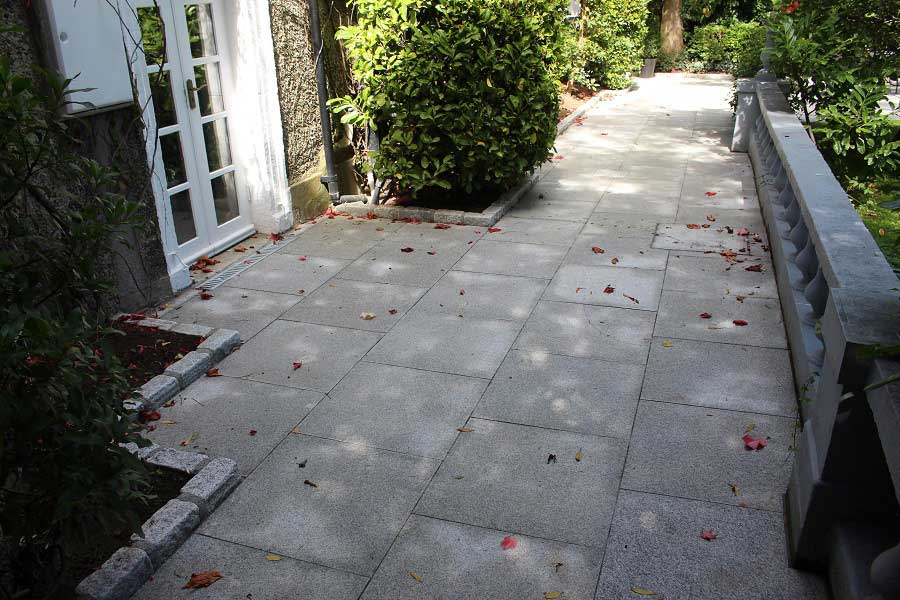 After surveying the site and taking photos I sat down with the client and created the following brief:

The first job undertaken was the removal of the existing concrete patio. Care was taken here not to damage roots of the Boston Ivy covering the house. We then removed the existing concrete path. This turned out to be a nightmare. The concrete was 200mm deep and reinforced with metal. I had allowed a half day for this, it took 2. All rubbish was removed. The wall was then broken out back to the first pillar and rubbish removed. 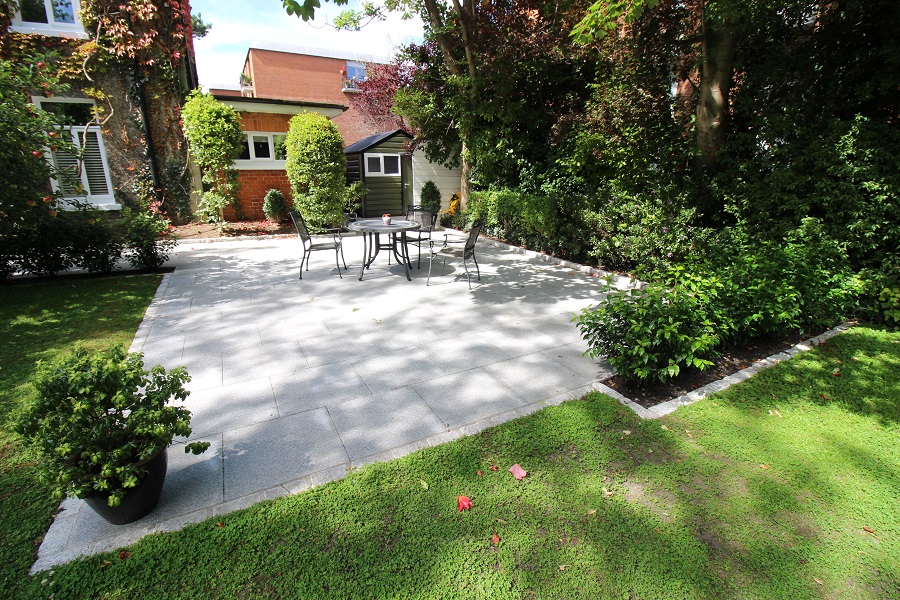 Next sod cutter was hired which we used to remove the turf from the area to be excavated for the extended seating area. The sod was put aside for later. We then removed the topsoil to a depth of 100mm. This topsoil was used to fill excavations from the removal of the path. The whole run was then re-turfed with sod we had stored. The rest of the excavated soil was put aside for later. 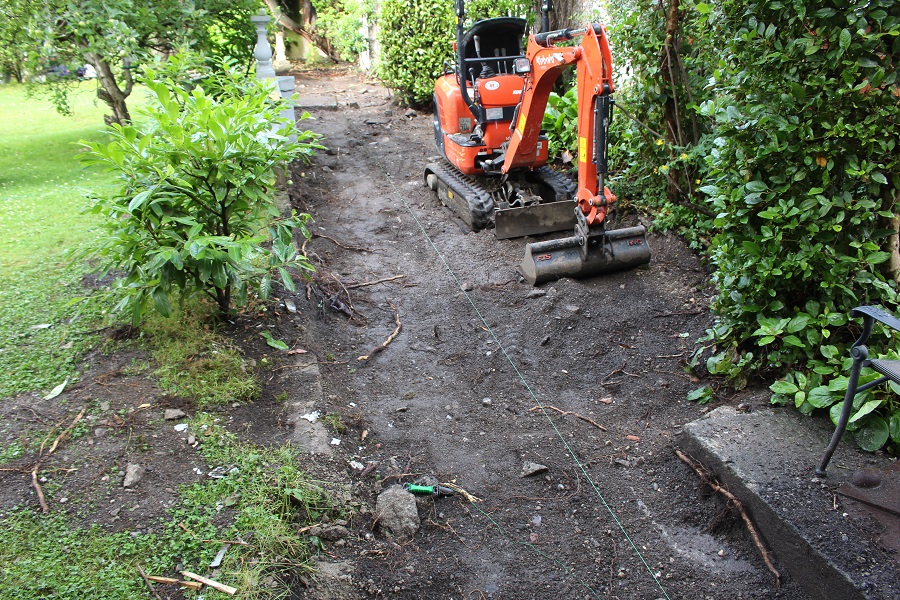 Quarry screenings were then spread to a depth of 50mm and compacted. Old man-holes were removed and replaced with recessed ones. Aco drains were installed in front of two doors. The whole area was then paved with 600x600mm silver granite slabs. 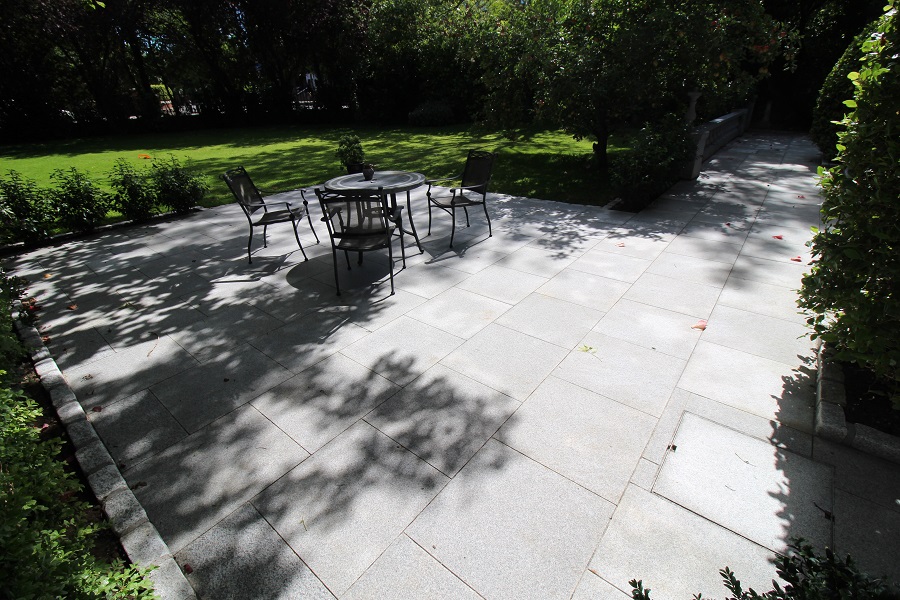 We then installed the 200x100x100 raised edging along the bed by the house and along the Western boundary. 200x100x50mm cobbles were then used to create new beds and edge patios. The beds created around the patio and back to the pillar were then planted with 1.4M Portuguese Laurel specimens. This instantly softened the space and gave a sense of compartmentalization.  The bed by the house was cleared of unwanted plants and planted with suitable specimens to fill gaps. The stored soil was then used to mulch and bring up levels in beds. 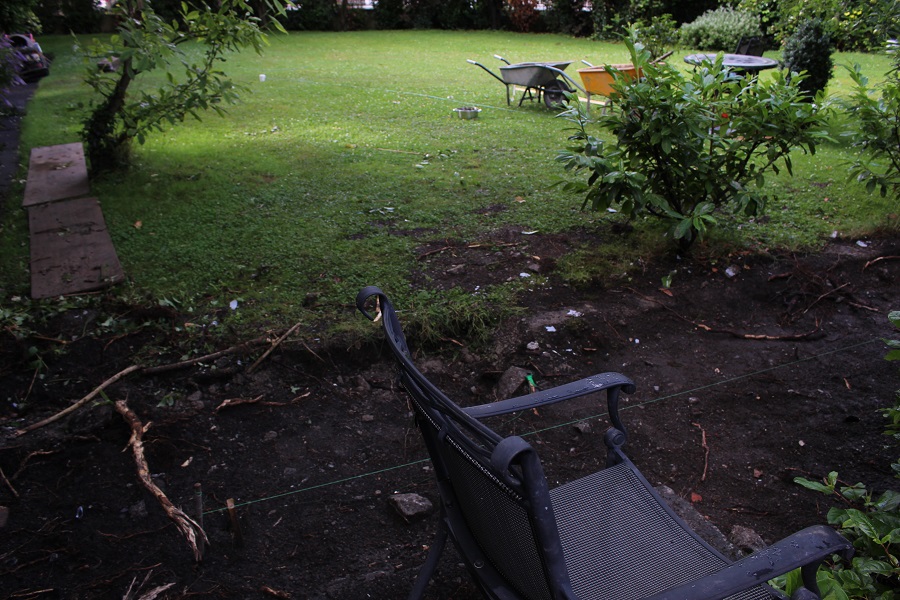 A gate was then installed between the house and shed and painted the same RAL as the shed.

Mature laurels were then planted under the existing Prunus pissardiis, along the Southern Boundary and gaps were filled on the Western with the same. Laurels are a tough plant, don’t mind shade and are suitable for wildlife as they are indigenous to Ireland. 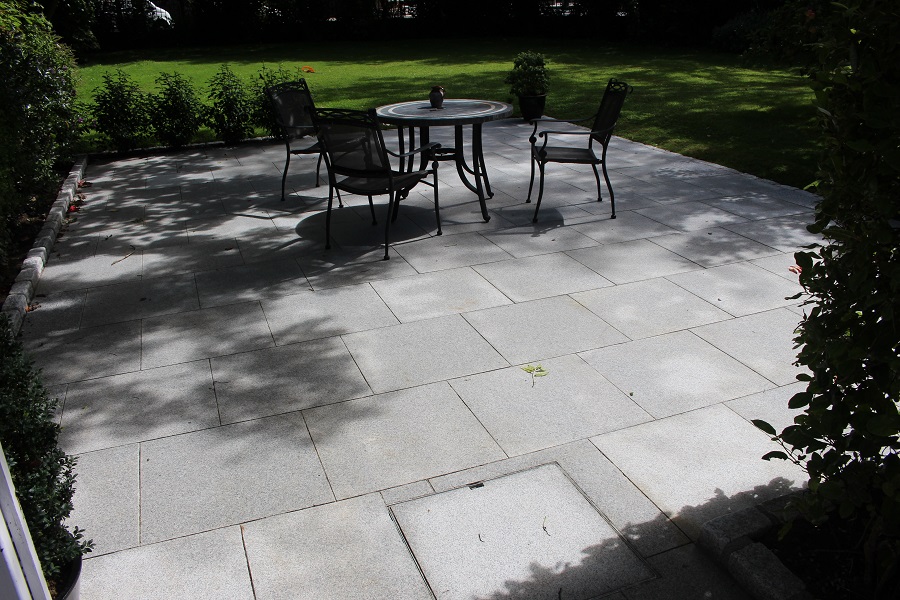 I then made contact with Darragh Connolly to set up a maintenance contract for the clients moving forward. Darragh is an excellent Landscaper who concentrates on the maintenance of gardens. 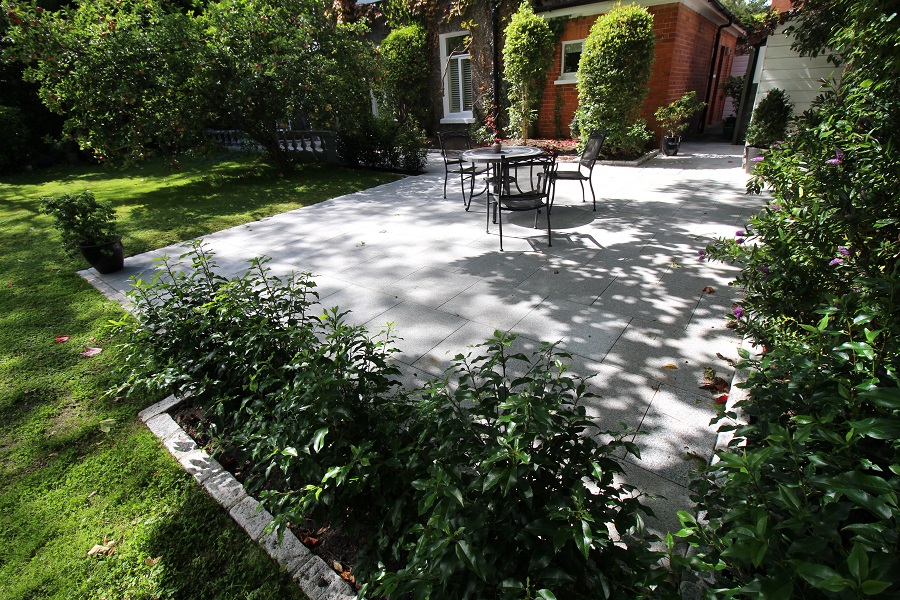 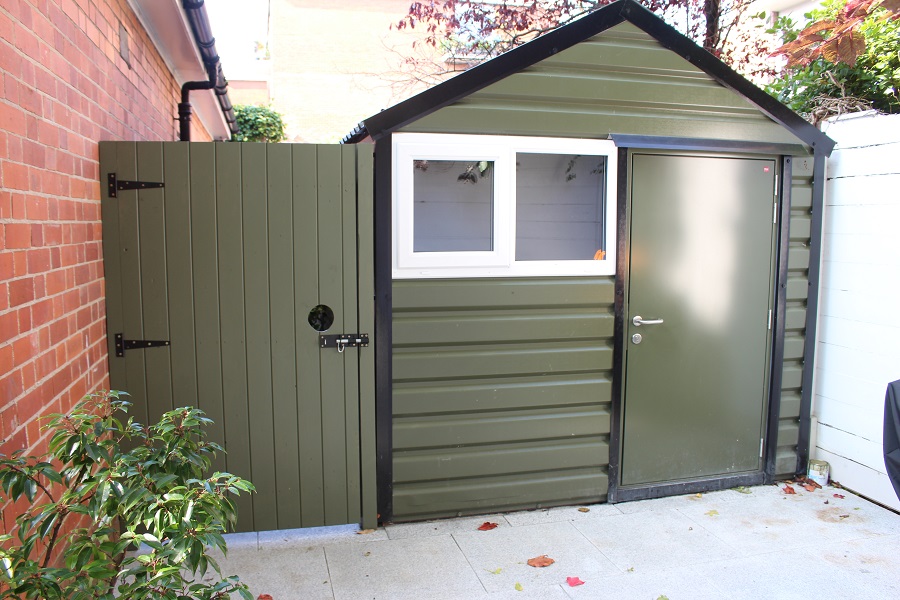 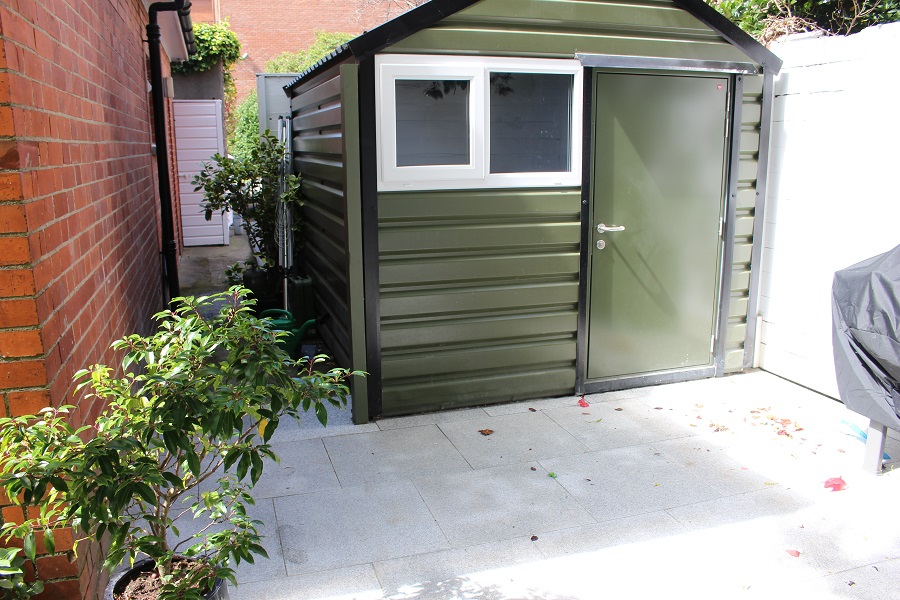 The client was delighted with the results, and kindly posted the following review on Google:

“Kevin has transformed our back garden, providing us with a landscaping solution that looks great and also greatly enhances our enjoyment of the space. Kevin started with an excellent design but was also willing to work collaboratively as he helped us tease out our preferences. There was good open dialogue around budget and he accommodated changes without cost increases. There was no task that was too difficult and no detail that was overlooked. Kevin’s experience, ability and attention to detail has given us a quality garden that is a delight to look at and use”

Thanks very much Eoin and Margaret for trusting us with your property again, I thought we made a great team. Also thanks for such a fantastic review. Much obliged, Kevin Baumann.